Miss Sim Universe was aired for first time in Summer 2008, in Miss Sim Universe YouTube Channel. It was founded by J.K at age of fifteen. The idea of this young men from Spain was to make a different show with Sims. He tried a year before to make another sims beauty pageant called Miss Sim World thus of the Channel on YouTube). The first edition of this contest was very successfull, it has more than 20 delegates and finally Nashira Galistera from Turkey was crowned Miss Sim World 2007. One year later he tried to do it again, but the fame of the contest disappeared, nobody sent sims... so he forgot the idea of a Beauty Pageant for sims. Several months later he decided to try it again, to make a beauty contest but with everything made by him: the delegates, the stage, the runways... He did it and it was so successfully the people loved it and it had more than 8,000 visits to date. A year later he did it again and the people received it with their hands open, it had 8 more delegates and 50,000 of shares. Now it has become in one of the most waited shows along YouTube, it has become so international and famous. Third edition was waited to be broadcasted in Summer 2010, but due to technical problems and trouble with the organization the contest suffered one year hiatus.

In 2011 it was announced that the contest was going to have a new president: Rodolfo Mendieta from Mexico, who already owned the Miss Sim Mexico Pageant, so J.K, MSU's creator, left the contest after 3 years and 2 editions. The third edition was finally realized in last 2011, ended in 2012, becoming the very first year that the winner was crowned in the following year. It had almost 60 delegates, who were the same delegates who were going to compete in 2010 edition. Despire being one of the less watched edition, the organization apologized because they had not much time to make the contest, and they already promised to make 2012 edition even bigger. The 2012 edition finished, as well than 2011, in the following year... with a similar share than 2011 but better quality.

Finally on March 10, 2013, just one month later it was finally revealed that this decision was because Dat Torres was chosen as the new Miss Sim Universe President until 2015 when he announced he was not going to be the president. In 2016 Fer Gonzalez from Mexico became the new president of Miss Sim Universe and until today he made the pageant successfully reach up to 90 contestants and making the quality of the pageants as perfect as the original edition.

Miss Sim Universe aims at finding the most beautiful sim in the world, to do so, a panel of judges, comprised of expert in beauty pageants, evaluate each delegate.

The show is divided into three major parts:

On the Final Night, the first round is Swimsuit Competition, where the Top 15/16/20 parade with the same swimsuit. Here they evaluate all the qualities that a beauty queen should have, but in this round the most important features are the body and the runway performance. After this competition the judges choose the Top 10.

The second round is the Evening Gown Competition. Everyone have a different dress. In this round the most important thing is the elegance of the girl. After this competition the judges choose the Final Top 5.

Then, the Top 5 compete in the Final Questions round (not held in 2009), where they have to answer a question from the judges, from the public since 2015. Here they should demonstrate their intelligence and eloquence. The question is answered by the creator of the sim.

The delegates to compete in Miss Sim Universe beauty contest are sent by the people who watch the show. Everyone who likes making sims and like beauty competitions are able to send their contestants. All them must prepare their best sims, send them with their dresses and their look (hair, make up...) that they wanted that their sims have in the Final Show.

Miss Sim Universe Organization has had three crowns in its two editions: one of them is from Modthesims and the other one is original. The first one was used in MSU 2008, it was from ModtheSims Download Website and was designed by Rock Chick and it was called "Charmaine Tiara". The second one was made by Miss Sim Universe Organization, it is based on real Miss Universe crown used from 2001 to 2007. It was called "Dominicana Tiara" in honor of the host country where it was used for the first time: the Dominican Republic. In the 2011 edition, the crowned was changed one more time for a new jew inspired in the "Peace" Miss Universe Crown. A new crown was presented during Miss Sim Universe 2015 final night, it is based on original Miss Universe's D.I.C crown.

The current crown was presented in 2017, it is based on the original Miss Universe Mikimoto crown.Then in 2020 the Mouawad crown was created in honor to the real crown being used by the Miss Universe Pageant at the time. 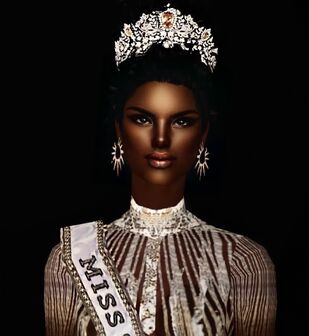 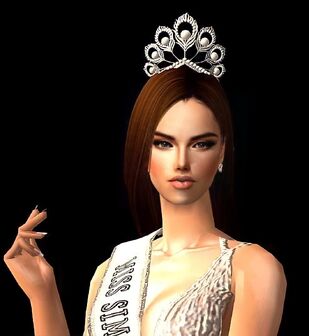 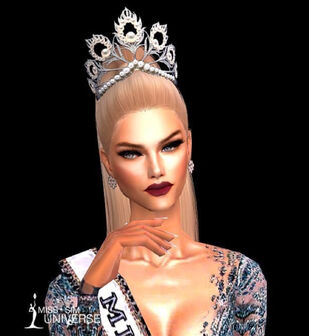 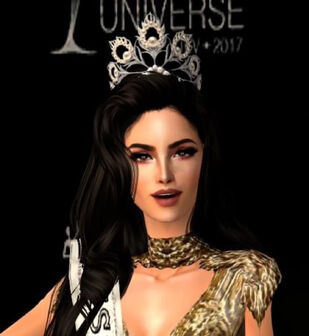 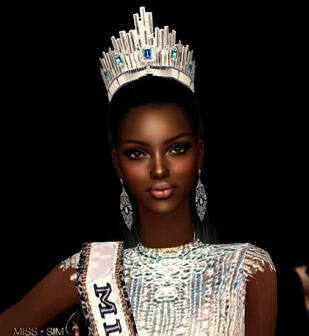 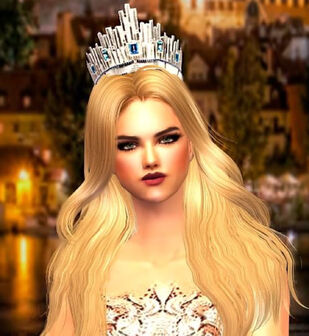 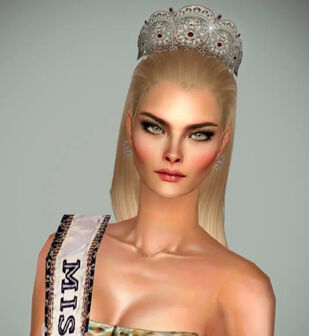 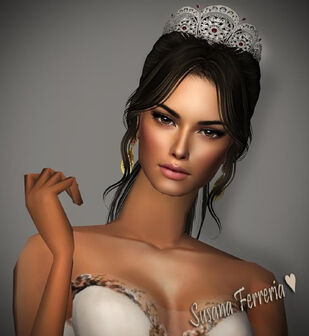 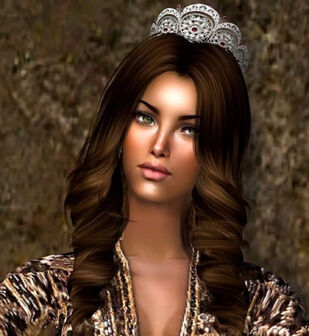 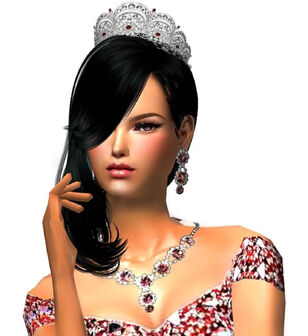 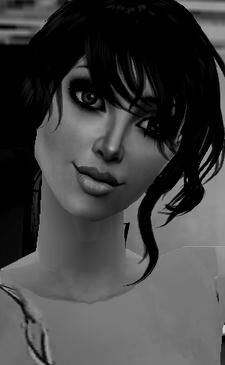 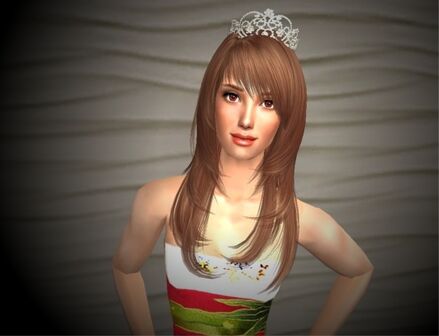 The Grand Slam Ranking is the official ranking of the most competitive states in Miss Sim Universe. It is based on the placement of the contestants from each country.

This table is updated to Miss Sim Universe 2020 edition.

Community content is available under CC-BY-SA unless otherwise noted.
Advertisement